The focus of the evening was the sonic explorations of four masters, beyond the bounds of a predictable groove, melodic motif, and chord progression. Which is not to say these guys didn't groove. They grooved, but far outside the expected bounds of bar lines and predictable time signatures.  And not to say there were no melodies and no chord progressions.  The arrangements were solidly tonal but pushed the boundaries of audience expectations with their extended scope and development.

The first two pieces, more recently written by Wayne Shorter, took over an hour to perform, setting the mood for an evening of improvisatory wizadry with their stretched out openings, long development sections, and expanded recapitulations. The third piece, "Maiden Voyage" finally took us back to familiar territory.  But even there, the Maiden Voyage melody was deconstructed and transmogrified, put in unexpected places, rhythmically phased, playfully transposed into different keys and then transposed back again.  Wayne Shorter's "Visitor from Nowhere" was another broad sonic territory for the four virtuosi to traverse, ideas and inspiration unfurling and multiplying under their direction. 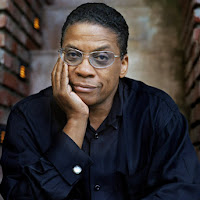 The encore was Herbie Hancock's classic "Cantaloupe Island",   which began as mysterious ruminations by Dave Holland on bass, eventually coalescing into fragments of that world-famous "Cantaloupe Island" bass line, but holding back on being completely recognizable until Wayne Shorter stepped in boldly with the first two notes of main melody.  Saturday evening's concert was a window for the audience to see what can happen when masters step in with invited friends to deconstruct their own and each other's pieces.  Herbie Hancock - transformed, transmogrified, and transcendent.

Posted by Lisa Kato Fitchett at 11:02 AM

Most Popular Posts Within The Last 7 Days 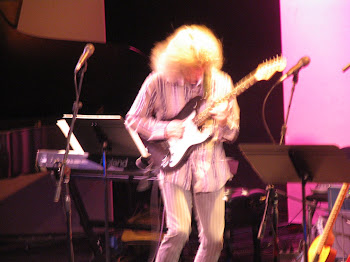 Mark Fitchett at a headline performance at Alva's Showroom in San Pedro, California